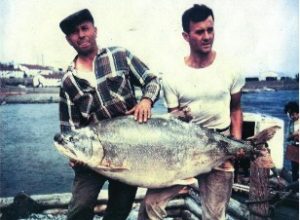 The lake trout (actually a char) is one of the largest fish swimming in BC lakes, reaching weights in excess of 20 kg. It is a highly prized sportfish, and at one time was an important commercial species, especially in the Great Lakes, until overfishing, pollution, and predation by invasive lampreys nearly eliminated the stocks in the mid 20th century (U.S. Fish & Wildlife Service, N.D.). The largest known lake trout was caught in a gill net in Lake Athabasca in 1961 and tipped the scales at an incredible 46.3 kg (102 lbs) (Mathias, 2009).

Where do they live?

Lake trout tend to prefer cold water, around 10°C, and live mostly in large, deep lakes across North America (Fish’n BC, N.D.). In BC, their native range is from Shuswap Lake northward. They are absent from Vancouver Island and the Columbia system, but have been introduced to the lower Columbia, lower Kootenay, and Okanagan regions. In the northern half of their Canadian range, they can be found in shallow lakes and rivers (B.C. Ministry of Fisheries, 1999).

What do they eat?

Lake trout have a varied diet depending on their length, weight, and age (Fish’n BC, N.D.). Young lake trout initially feed on zooplankton and as they grow, they gradually consume larger organisms including crustaceans, snails, leeches, and insects (Fish’n BC, N.D.). Larger lake trout prey on other fish such as kokanee, whitefish, burbot, and sculpins, and have been known to eat small mammals such as mice and shrews (B.C. Ministry of Fisheries, 1999).

Lake trout generally spawn during the fall between September and November. Spawning takes place at night, and unlike most salmonids, they do not require running water to spawn, although some stream spawning has been recorded (B.C. Ministry of Fisheries, 1999). No nest is built at the spawning site; males arrive first and clean the substrate by brushing away any loose sand or silt with their bodies, fins, and snouts. The female deposits the eggs in the presence of two or more males that press against the sides of the female as they fertilize the eggs. The fertilized eggs become lodged in crevices in the rocks on the bottom, where they remain for months before hatching (B.C. Ministry of Fisheries, 1999). A female can contain up to 17,000 eggs and may spawn several times in one year depending on conditions. In colder climates, the female may not reach spawning condition again for another 2 or 3 years (B.C. Ministry of Fisheries, 1999). 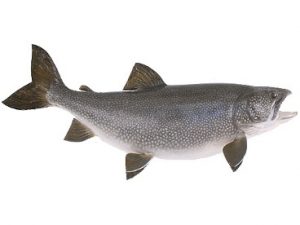 Young lake trout remain in shallow water along the shore for several years before moving into deeper waters. Lake trout often live to more than 20 years of age; the oldest of this late maturing species on record was 70 years of age (U.S. Fish & Wildlife Service, N.D.). Age at maturity varies widely depending on the climate, ranging from around 5 years of age in southern areas, to more than 20 years in northern BC. Males typically mature at a younger age than females (B.C. Ministry of Fisheries, 1999).

In BC, the lake trout is a yellow-listed species, meaning that it is not currently at risk (B.C. Conservation Data Centre, 2019). However, some populations are considered vulnerable because of land use practices. Because they are the top predator of their aquatic ecosystem, they require special management. As there are never many older, large fish, they can easily be overfished, and their populations can be threatened. It is important to abide by fishing regulations to ensure the success of the species (B.C. Ministry of Fisheries, 1999).

How can you help?

To help protect lake trout in your region, remember the following: