Meet the Board: Rick Nordin 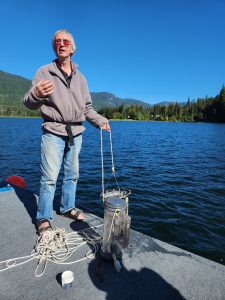 Rick worked for the BC Ministry of Environment from 1974 to 2002 as the provincial specialist in limnology and water quality – job title for most of this period was Provincial Limnologist. He was involved with projects in all areas of BC with particular emphasis on eutrophication and drinking water protection.

He taught part time at the University of Victoria from 1989 to 2016 and had an appointment as an adjunct professor in the biology department and taught a number of courses, carried out research programs, and supervised graduate students. From 2002 to 2008, he worked as senior research scientist in the Environmental Management of Drinking Water Program at UVic.

He has been a board member of BCLSS since it was formed in 1997 and has also served on the board of directors for the North American Lake Management Society. We appreciate the many years he has spent stewarding lakes across Canada and educating our members and staff, and teaching our LakeKeepers Workshops.