Compact mounds of partially dried and decayed plant material and mud can frequently be seen scattered among the cattails and bulrushes of marshy landscapes. These are homes of the muskrat, a large rodent commonly found in the wetlands and waterways of North America. Although the muskrat builds lodges near the water and is an accomplished swimmer, it is not related to the beaver (Hinterland Who’s Who, 1987). It is actually related to a common field vole and has adapted to life in and around water. Adult muskrats weigh about 1 to 1.5 kg and are about 50 to 60 cm in length from tip to tip. The tail is slender, flattened vertically, about 25 cm long, and covered with a protective scaly skin (Hatler et al., 2003). 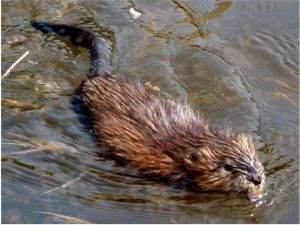 Their pelage consists of a dense layer of underfur that is often greyish, overlain by thick, glossy brown guard hairs causing most animals to be some shade of brown in appearance (Hatler et al., 2003). Muskrats have modified front teeth to allow underwater chewing. The incisors protrude ahead of the cheeks and of lips so that they can chew on stems and roots under water with their mouths closed (Hinterland Who’s Who, 1987).

The muskrat is more widely distributed in North America than almost any other mammal and in this respect is a very successful species. The Canadian distribution is coast-to-coast south of the arctic tundra. In BC, muskrats occur throughout most of the mainland, however they are rare or absent west of the Coast Range, but are well-established as introduced species on Vancouver Island, Haida Gwaii, and the Gulf Islands (Hatler et al., 2003). Muskrats typically live in freshwater marshes, marshy areas of lakes, and slow-moving streams. The water must be deep enough so that it will not freeze to the bottom during the winter, but shallow enough to permit growth of aquatic vegetation. Areas with good growth of bulrushes, cattails, pondweeds, or sedges are preferred. Bulrushes and cattails are most important, particularly in lakes. They are used as building material in the construction of lodges and feeding stations, and as shelter from winds and wave action. In northern regions, horsetails can be important in muskrat habitat (Hinterland Who’s Who, 1987).

Of all plants available in marshes, cattails are the most preferred food for muskrats. They also appear to thrive well on a diet of bulrushes, horsetails, or pondweeds. They have been found to eat a variety of other plants including sedges, wild rice, and willows (Hinterland Who’s Who). When their normal food items are scarce or unavailable, muskrats are known to be carnivorous. In these circumstances, muskrats most commonly consume animals such as fish, frogs, and clams. This diet is usually indicative or hard times and the muskrats do not thrive as meat eaters (Sierra Club, 2016).

Shortly after freeze-up, muskrats chew holes through the ice in bays and channels up to 90 m away from the lodge to create “push-ups.” After an opening has been created, plant material and mud are used to make a roof over it, resulting in a miniature lodge. Typically, there is just enough room for one muskrat in the push-up. It is used as a resting place during underwater forays, and as a feeding station (Hinterland Who’s Who, 1987).

During the winter a thick layer of ice restricts the muskrat to the interior of the lodge or burrow and the watery environment beneath the ice. The animal’s highly developed diving abilities and its use of push-ups become critical in procuring food under those conditions. Foraging trips, covering considerable distances, are made under the ice. When the feeding area is reached, portions of plants are chewed off and carried to the nearest push-up, where they are consumed. This foraging activity under perhaps a metre of ice and snow, in ice-cold water and almost total darkness, is truly a remarkable feat (Hinterland Who’s Who, 1987).

Mating activity occurs immediately following ice-off. Males compete fiercely for females. The basic social unit is a breeding pair, which defends its home range territory against occupation by other adults. The birth of the litter, containing 5–10 young, occurs less than a month after the female has been mated. The same female normally has another litter a month after the first, and sometimes yet another a month after the second. Breeding continues throughout the summer, with the last litter being born early August. The young are blind, hairless, and almost completely helpless at birth, but they develop rapidly; they are covered with thin fur at the end of the first week, their eyes open at the end of the second week, and they normally begin leaving the lodge on short trips at about two to three weeks of age (Hinterland Who’s Who, 1987). Juveniles are essentially independent at six weeks (Sierra Club, 2016).

Food is plentiful during the summer, and the growth of young is rapid. With the shortening of days and the coming of colder weather in September, preparations for winter begin. The fall is spent building and reinforcing lodges for winter occupancy, and, in some regions, storing food for winter use. Lodge building behaviour is an extremely important aspect of the ecology of muskrats. The lodge permits them to live in areas surrounded by water, far away from dry land. Where soil conditions allow, muskrats may dig and live in burrow systems. Both lodges and bank dens or nest chambers protect them from predators and gives them shelter from the weather (Hinterland Who’s Who).

Muskrats, like many other wildlife species, show large fluctuations in numbers that follow what appears to be a regular pattern. In the case of the muskrat, numbers decrease drastically about every 7–10 years. At such times, few or no muskrats can be found where 2 or 3 years earlier there had been thousands. These catastrophes are often blamed on predators or on over-trapping. However, scientists do not believe that these are the real causes. Instead, for some as-yet-unknown reason, the health of individuals deteriorates, causing widespread death and reproductive failure. Reproductive and death rates return to normal 1 or 2 years following such a population decline, leading to an increase in muskrat numbers once more (Hinterland Who’s Who, 1987).

Despite heavy trapping and draining of wetland areas, muskrats are a common animal in Canada. A natural side effect of beaver dams can be to regulate water levels to benefit muskrats. Muskrats are resilient and their population is not under threat. Their future in BC is bright.