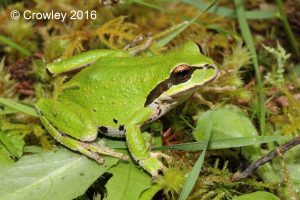 The Pacific Treefrog, or Pacific Chorus Frog as it is commonly known, is a small frog found very commonly throughout southern British Columbia. They range from Vancouver Island to the southern mainland, and most recently they have been found in Haida Gwaii. They are relatively small frogs (although females are slightly larger than males), only growing to about 5cm in length, but they have long slender legs, which end in padded toes that help them grip and climb (Canadian Herpetological Society, 2022). These padded toes are a great asset to the frogs as they hunt for food such as spiders and a variety of small insects that can easily be found on plant life. They are also beneficial to the frog when a quick escape from predators such as snakes, birds, or bullfrogs is necessary (BC Frog Watch, 2001).

Outside of the breeding season, the Pacific Treefrog can live in various habitats, ranging from woodlands to urban areas, but during the breeding season, they make their way back to small wetlands, ponds, shallow lakes, and temporary water sources with an abundance of plant cover (BC Frog Watch, 2001). They prefer these wetlands and ponds while breeding because they can avoid predators such as large fish or bullfrogs that require permanent water bodies to survive.

When the time comes for the Pacific Treefrog to breed (between November and July), the males make their way to breeding ponds and call out in unison to attract females. Several calling males is called a chorus; therefore, this breeding trait is the source of the name Pacific Chorus Frog. For such small frogs, these choruses can be quite loud! After mating with a female, she goes to shallow water with some protective vegetation to lay 10 to 70 eggs in a cluster (BC Frog Watch, 2001). After two to three weeks, tadpoles hatch, living off algae and detritus matter found within the ponds. It will take roughly two months for the tadpoles to metamorphose into frogs. These young Pacific Treefrogs may be only a single centimeter in length, but after one year’s growth, can be ready to breed in the following year (Canadian Herpetological Society, 2022).

The Pacific Treefrog is quite abundant in southern BC as well as Vancouver Island and is currently a yellow listed species meaning it is not a species of conservation concern (BC Conservation Data Centre, 2022). It is so abundant, that other predatory species such as Garter Snakes depend on the frog as their main food supply. To further its success as a species it is protected under the British Columbia Wildlife Act (BC Frog Watch, 2001). The greatest threat to the Pacific Treefrog is habitat loss and degradation, primarily from logging and urban development. Climate change may also pose future threats, particularly by increasing the frequency and severity of droughts (Canadian Herpetological Society, 2022). The best way to ensure their continued abundance is to maintain and preserve BC’s wetlands, because ultimately it is the wetlands that ensure breeding success and is a newly hatched Pacific Treefrog’s first home. Another way to help is to become a Frogwatcher and help identify declining trends, areas of conservation concern, and conservation measures that need to be taken. Learn more about the BC Frog Watch program here.