The Gun Lake Ratepayers Association (GLRA) was formed in 1971 with a mission to preserve, protect, and support the Gun Lake Watershed through education, collaboration with municipal, provincial, and federal governments, and societies or associations with similar purposes. The GLRA has been actively working to protect the Gun Lake watershed area by monitoring the quality of the lake and educating local residents. 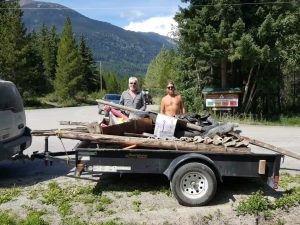 The crystal-clear Gun Lake is nestled at the foot of the Dickson Range on the traditional territories of the St’át’imc peoples. The lake has a surface area of 5.35 km2, a perimeter of 15.4 km, and has a maximum depth of 103 m. Water temperature averages 17°C in the summer and the lake is covered in ice January through April. The lake contains bull trout, dolly varden, kokanee, rainbow trout, and redside shiner and has been stocked with rainbow trout every year since 1995. Along with fishing, recreational activities include boating, paddling, swimming, and camping. The GLRA has reported an increased level of boating activities in recent years.

Gun Lake has had the deepest Secchi depth reading during the annual Secchi Dip-In since 1999, a testament to the clear, pure waters! Thanks to the effort of dedicated volunteers, the GLRA has provided a very thorough and consistent dataset of water quality data and the BCLSS has written a report capturing the results of a Level 1 study between 2005 and 2020. Read the report to learn more about Gun Lake water quality here. The data collected by volunteers is added to a provincial database that helps inform stewardship and management actions.

The GLRA would like to highlight the exceptional efforts of Don Sturgess, a long-time Board Member who has been very proactive in their water testing program. Don will be stepping down from his role on the Board shortly. Thank you for your great stewardship efforts, Don!

In addition to water monitoring, the GLRA has several other initiatives to protect Gun Lake and the watershed including their annual Great Gun Lake Clean Up where they remove significant amount of litter from the lake shoreline. 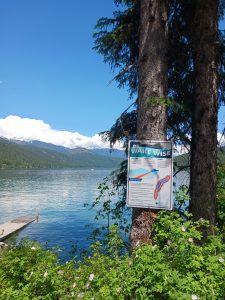 As a result of the increased level of boating activities and the rise in interest in wake boating, they have also recently started a Wake Wise education campaign to inform boaters about the effects large wakes have on loon nests, on infrastructure such as docks, on the shoreline, and on other small watercraft such as paddleboards and kayaks. Their new signs can be seen around the lake with useful tips on how to minimize disturbance and damage. The signs also include a map of where wake boating activities can be best enjoyed and where the no-wake zones are. This campaign is a testament to the dedication of the GLRA to protecting Gun Lake and educating the community.

The BCLSS is incredibly grateful to have a member group with such an enthusiastic group of volunteers and we are excited to see what future initiatives the GLRA takes on. To stay up to date on their activities, you can follow them on Facebook or visit their website.