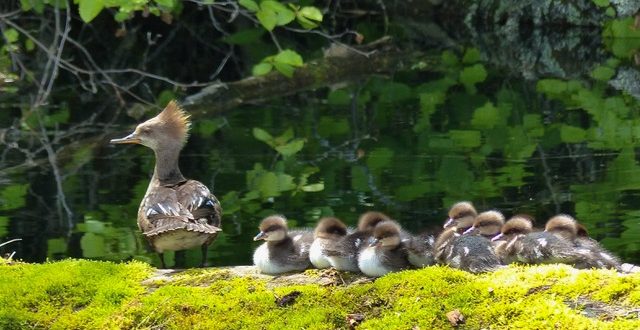 In 2009, a member of the Heffley Lake stewardship committee noted that there seemed to be fewer ducks than there used to be. This led to the formation of an official count. The lake was divided into 6 zones and 6 couples were recruited to cover the zones. Count sheets were made up that included waterfowl, eagles, herons, osprey, and Western Red Painted turtles. A schedule of 7 outings for the season was distributed with the agreed upon starting time of 9:00 am. It takes each couple about one hour to complete their zone. All participants then gather at a home to review results, hand in their sheets and enjoy coffee and muffins. Each family takes turns hosting. At the end of the season, results are tabulated, and a 2-page report is compiled and distributed. All the original participants, including volunteer backups, are continuing to do the count. 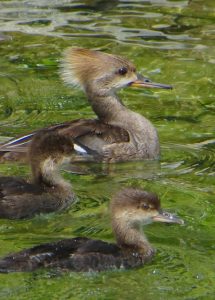 For the first 9 years of counting, the total bird numbers fell every year. By 2017, numbers were 46% of what they were in 2009. The lowest year just for ducks occurred in 2016. By that time, volunteers were seeing only 28% of the starting numbers. Although the overall count dropped again the following year, the duck population showed a slight increase. This trend continued for the next 3 years. By last year, the duck numbers were back to 78% of the initial count. Unfortunately, so far for this season, the count is down about 25% compared to where it was last year. The volunteers believe the cold wet spring and increased predation by eagles and coyotes contributed to this decrease. Also, the lake level was very low last fall, but rose 5 ft. 5.5 inches to near record levels, which flooded some nests along the shoreline. 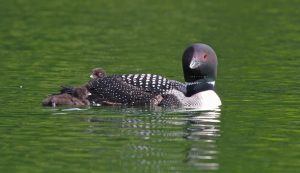 The most common duck found at Heffley Lake is the mallard. Their numbers also fell during the first 8 years but have rebounded well. Goldeneyes used to be the second most common duck, but numbers declined to almost zero. Their numbers are slowly increasing. It is interesting to note that as goldeneye numbers fell, hooded merganser numbers increased. The loon population dropped initially, remained fairly stable, and in recent years started to increase again. Most years there are at least 2 loon chicks that make it to adulthood and sometimes up to four. Unfortunately, this year both loon chicks have disappeared. Eagles were observed divebombing them. One adult loon was found dead, floating in the lake. An autopsy revealed that it died of severe blunt force trauma, likely from a boat.

Buffleheads, ring-necked, and grebe duck numbers fluctuate, but have decreased over time. Geese numbers were low when the bird counts first started, but steadily increased to a high in 2012. After that, their numbers declined somewhat and then levelled off for a while before increasing to an all-time high in 2021. This year, the average number of geese showed up and they were observed during the first 2 counts. They seemed to be displaying some unusual behaviour; at first, they seemed to be getting ready to nest in usual places, but then started regrouping and flying around a lot. Then they left without nesting, and none have been seen since. Coyotes were seen near some of their nesting sites.

The heron rookery (at least 5 nests) at Heffley Lake was decimated by eagles. Later they re-established but again the eagles killed the young and drove them off. This year, volunteers have noticed a new rookery, that is well hidden and further from the lake and so far, they seem to be thriving. 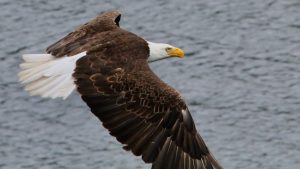 Osprey numbers have fallen significantly over time, but this year there are 2 nests that appear to have chicks. The eagle count has fluctuated greatly from year to year, varying from a low of 7 to a high last year of 32. This year, however, the count is higher than last year, and volunteers have observed more determined behaviour with one immature eagle that is relentless in going after the ducks and loons. Since the fish stopped spawning, their overall numbers have decreased. The aggressive one has not been seen for some time and the resident eagles appear to be acting more normally.

The turtle count has continued to increase and their range around the lake has expanded. There are many more turtles observed on sunny days than when it is overcast and that affects the count. However, overall, they seem to be continuing to increase in numbers.

Note* Ducks include mergansers and grebes

If you are interested in starting your own bird count, the Heffley Lake Community Association has generously agreed to provide advice to anyone interested. Please contact Doug Broadfoot at broadfoot1@hotmail.com for more information.