What's Happening Under the Ice?

Have you ever wondered what is happening to lakes and all the organisms that they host under the ice in the winter? Most interior BC lakes freeze in the winter, forming a layer of ice covering the entire surface of the lake. The majority of lakes and ponds don’t completely freeze as the ice, and eventually the snow that layers on top, acts to insulate the water below (Ausable River Association, 2016). Interior lakes follow a pattern where they stratify (separate into layers that don’t mix) in the summer, turnover or fully mix in the spring and fall, and then they re-stratify in the winter. This is known as a dimictic lake or a lake that turns over twice per year. In the summer, the warmest water is found at the surface and the coolest, most dense water can be found at the bottom of the lake. A thermocline forms which is defined by a temperature change of at least 1°C per vertical meter. As temperatures begins to cool down in the fall, the upper layer cools and all the water in the lake can mix as the density differences breakdown.

Lake water under the ice

To start, it is important to understand why ice floats. This video offers a great explanation; in summary, the way that the H2O molecules bond together at freezing temperatures, causes there to be lots of space between molecules, meaning that ice is less dense than water allowing it to float. If this were not the case, and ice formed from the bottom up, there would be no habitat for fish and other aquatic organism in the winter. In winter, a reverse stratification pattern forms, meaning that water gets colder as you go deeper into the lake. As water is most dense at 4°C, this can be found at the bottom of the lake.  Water freezes at 0°C so the narrow layer of water, just below the ice, will be similar to the ice temperature and a slight warming can be observed towards the bottom of the lake. Although a true thermocline does not form, the different densities between water layers prevent mixing from occurring. The ice layer also prevents mixing of the lake water by wind. Without the mixing of water, the influx of oxygen at the surface, or oxygen produced by plants that are photosynthesizing, there is little supply of oxygen to the lake in the winter. 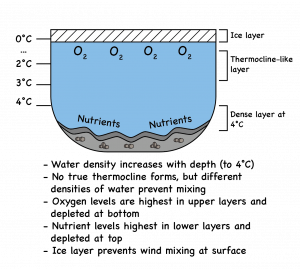 Lakes that are clear and less biologically productive will have sufficient oxygen to support life at all depths through periods of stratification. As lakes become more productive and increasing quantities of plants and animals respire and decay, more oxygen consumption occurs, especially near the bottom where dead organisms accumulate. Oxygen in bottom layers may decrease rapidly, forcing fish to move into the upper layer. Fish kills can occur when decomposing algae and organic material use up the oxygen.

Decomposition of organic material from dead organisms or organic material from the watershed (leaves, fallen trees, etc.) is an important process in lakes and can be more obvious when lakes are ice covered. With clear ice, the rising bubbles of carbon dioxide and methane are frozen into the ice and make for a spectacular display (Ward, 2021). Some lakes produce very large volumes of methane – to the point where it can be ignited as it exits a sampling hole in the ice surface (Fox, 2019). Visit this link to see this spectacular phenomenon for yourself! BCLSS advocates following safety protocols for all on ice activities. If venturing out on the ice for any activity, precautions should be taken to ensure ice is sufficiently safe. To learn more about ice safety, read this article by the Canadian Red Cross. What do fish do in the winter?

Being trapped under the ice with little oxygen might not sound very appealing, however, many organisms such as fish, have adapted to these conditions. Lake fish including Pike, Largemouth Bass, Trout, Yellow Perch, and more have adapted to this low oxygen, cold environment. Some fish species will move to the lake inlet, where freshwater from the streams flowing into the lake brings in dissolved oxygen allowing the fish to breathe. Other fish that live at the bottom of a lake, move towards the edges of the lake where the shallow water is oxygenated to the bottom. Some fish hover near the ice surface where oxygen in the ice slowly dissolves into the water (Trout Unlimited Canada, 2020).

While the area right below the ice may be one of the most oxygen rich areas in the lake during the winter, it is also the coolest where water can be less than 1°C. To avoid hypothermia, fish conserve energy by entering a state of semi-dormancy where they reduce their metabolism, limit movement, breathing rate, and primary bodily functions (NOAA, 2021). Another way fish can combat the cold environment is to increase their activity and breathing rates to stay warm which also means they need to feed actively throughout the winter which can be difficult with scarce resources (Trout Unlimited Canada, 2020).

What about other organisms?

Other organisms such as phytoplankton that live in lakes, produce thick-walled resistant cells that settle to the bottom of the lake where they overwinter. Zooplankton use a similar strategy, where they enter a resting stage and spend the winter in the relatively warm lake sediments. Amphibians will enter a state of hibernation for the winter and often burrow themselves down into the sediment along the lake bottom. Aquatic plants die back during the winter as they aren’t able to receive enough light beneath the ice to continue growing. However, their root systems remain intact and store energy so that they can produce new vegetation in the spring (Ausable River Association, 2016). In winter months, benthic, or bottom dwelling invertebrates have been found to burrow into the substrate of the littoral zone, the zone where sunlight reaches the bottom in sufficient amounts to promote plant growth. They construct a cocoon and burrow deep into the bottom sediments and remain in this temporary habitat until it returns to a suitable state (Oldenburg, 2014).

It is being discovered that in some lakes under specific conditions, there can be very active biological activity under the lake ice. Recent research has documented algal blooms under lake ice (Weisberger, 2016; Sorensen, 2016) with some specific case studies in Lake Erie (Hill, 2020) and in Lake Baikal (Hampton et al., 2020). Clear ice that enables algal photosynthesis seems to be an important factor.

The natural world is incredibly resilient. This unique environment demonstrates the varied properties of water and some of the many cold adaptations that plants and animals have to survive the harsh reality under the ice.

NOAA (2021). Where do fish go when it freezes outside? National Ocean Service website. https://oceanservice.noaa.gov/facts/fish-freeze.html